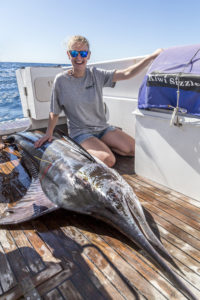 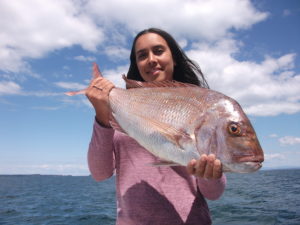 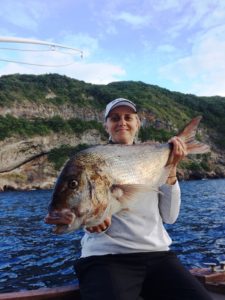 Wow Wow Wow! What a cool event, with cool people, great prizes and just a great vibe! In a season of largely windy weather the ladies really scored perhaps the best that could be expected. Just prior to the Thursday night briefing the weather eased with the Gale Force warning being dropped and it became clear that the days ahead were going to be better than the original forecast. So although it was a little bit sloppy for the Friday morning, the girls could look forward to much calmer seas over the days ahead.

As always, there is always a good deal of marlin and tuna fever around although this season is proving harder than the last two to catch one of these elusive beasts. Offshore water conditions despite being blue and 20 degrees plus just seem to be devoid of the usual bait schools. It could be the season is just 6 weeks late, regardless the offshore fishing was tough this year.

Lucky the Fish N Chicks fish schedule comprises many more species than just the hard to get pelagics. With terakihi, snapper, and kingfish on the list it gives the ladies the option of hugging the islands or the inshore and having a great crack at winning some prizes. Somehow after doing the hard yards offshore a spot line fishing can be more relaxing and enjoyable, two qualities most teams in this event look for in the ‘perfect day fishing’.

Three good Kingies came across the weigh station scales the best of them being a 24.32kg model to Michelle Clark on board Wai Whare Charters, followed by a nice 17.88kg fish for Anita Syben on Apteryx these out of G Fab Trailers and High Duty Plastics.

Some quality snapper were also caught the best of them a 7.665kg model to Tracey Holmes on board Sterling Belle. Second place in the snapper went to Rhoda Phillip 5.87kg, and backed up by her team mate Kylie Silby 4.52kg both on board the boat Bliss.

The offshore efforts where not completely without reward with Cobar II striking first landing a stripey on the inside of Mayor in the green water! Unfortunately this fish came up tail wrapped and could not be revived. Although the fish didn’t quite make qualifying weight at 74kg but was a massive buzz for the team and Kelly Whifen who made the trip over from Australia.  Not wanting to miss out Emma Keyworth on Jans Decision managed a tag and release Striped Marlin as did Anita Syben again on Apteryx who seemed to be enjoying an action packed tournament!

Giving up on the offshore quest the team on Free Flo decided to hit Mayor in the hope of hitting pay dirt on the Tarakhi. They did just that managing a first and second place fish for Many Kupenga and sponsor Jodie Gollop with a 1.885 and 1.72kg respectively from Champness Roofing. Congratulations ladies!

This was the second year the HERO SHOT was run with the support of Tauranga SPARK BUSINESS HUB offering an Iphone 7 as incentive to get the best Fish N Chick on the water photo. We were flooded with entries as these can all be found on our Facebook site and our website www.tsfc.co.nz  Mandy Kupenga our HERO SHOT judge had her work cut out in sorting out the three top places but finally got there naming Kelly Whiffen’s on-board marlin shot number one, young Jovanna Pillay took out second with a very nice snapper perfectly positioned in great light, and in third was Tracey Holmes with her outstanding Mayor Island snapper. We had some great shots with a good deal of creativity in all of the entries so congratulations to everyone that got involved!

Prize giving was outstanding with all of the fancy dress teams going too extreme measures to impress. Supported by the Radical Kids Band the “Quick fire Runaway” was a hit giving piles of laughs along the way. Well done to the Xarisma 1st, SunKist 2nd and Ultimate Brandys finishing strongly in third!

To see all the action from on the water, at the weigh station, the prize giving  and after party click here