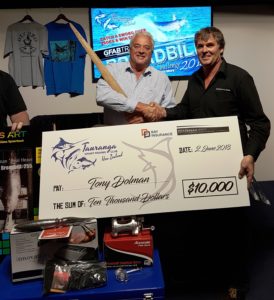 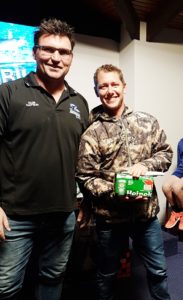 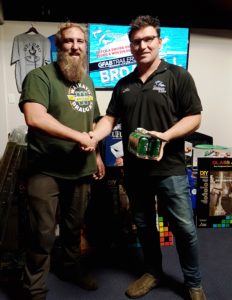 The stage was set again for that exciting time of year when the 80W mono sets get switched out for the deep drop sets, concrete bricks and diamond lights.  The Broadbill Challenge was back and with an exciting twist, with the help of Bay Insurance Brokers we were going to offer a $10,000 cash prize for the first Sword caught over 250kg.  Of course the fish needed to be caught inside chart and in accordance with IGFA rules.  Statistically it looked like a longshot as there had only ever been one fish caught over this mark in the Clubs 95 year history, this going to L Chinn back in 1969. What we do know is that these fish exist in our waters and although not abundant, it presented the perfect challenge.  Better yet, it was considered by a few that the 250kg benchmark was somewhat achievable, with the recent improvements in our knowledge of these fish, the gear and of course the techniques.

Clearly many of you thought that this target was achievable at this year as this year we had 89 hardy anglers sign up for the challenge versus just 39 last year.  The wonderful prizes were also somewhat of a motivator from Decoro, Stoney Creek and NZ Bayfisher and of course those fantastic trophies from Glass Art. 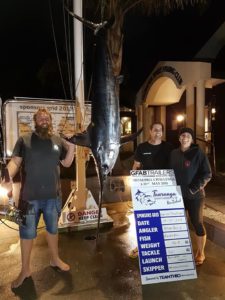 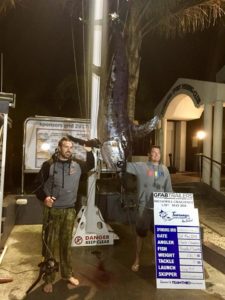 May 1st and day one produced a lovely day seeing a few boats rolling out and it didn’t take long for the phone to ring with news of the first tagged sword down in FMT Mortgage Finance #13 by Cody Joss on board Matilda, this one hooked at 11.20am and taking just 20minutes to the boat.  What a great start!  Things stepped up a gear at 3.15pm that same day with a call from the lads on King Hit indicating that they were hooked up to a nice one in High Duty Plastics #24.  This was landed just before 6pm and with the guys struggling to get it in the boat, questions on landed started to fly as to whether this was a contender for the 10k!  Late Tuesday night this fish pulled the gantry scales down to 174.7kg in what could be described as almost the perfect start to the event and the bar being set high from the first day.

The next weekend although the weather was not the kindest the entire comp was “chomping at the bit” to get out and it looked like that many of the teams were making the effort.  The 4/5th May produced some nice fish over the weekend with Dayle Lee getting a nice fish on a night bait. I understand this was the first time the guys on Fin Finder had tried this, and boom! This fish tipped the scales at 93.1kg.  Brothers in Arms struck the next day with an almost identical fish weighing 92.8kg landed by Jason Beck after an hour on the rod, all these again out of High Duty Plastics #24.  Further north Jans Decision also had a bite at 2.45pm, this one being tagged after an hour and eventually ended up being the last tagged for the comp.

The 12th May saw Isaac Holmberg on Elevar hit the mark hooking and landing a nice 98.9kg broadbill out of Walling Enterprises.

The weather interruptions have become standard part of trying to fish through May, with the regular storms causing frustrations as anglers become shore bound and we had to wait another week for the next proper window before the next fish, and the wait was worth it!!! 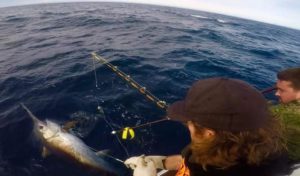