THIS EVENT IS ON THIS WEEKEND! SEE YOU @ BRIEFING FRIDAY 6.30pm

START FISHING IS STRAIGHT AFTER BRIEFING AND CONTINUOUS.

All Measure & Release entries will require a photo and catch card filled out.

If you are all about catching big Snapper and big Kingfish this tournament is the one event you can’t miss.

Perfectly timed to take advantage of the Mayor Island marauding Kingfish that will be smashing mackerel at Mayor, Penguins and the Okuparu’s. This happens every year just as the water warms up! The swing in water temperature is also the trigger for those large snapper that start to predate on school fish in the shallows around Motiti, Schooner and Plate….arrrrgghh where to go??? Talk about being spoilt for choice!

The Decoro Snapper Kingfish Tournament format has changed this year with a much larger focus on “Measure & Release”, in fact all of the best prizes will be going to those people that release fish.

To fish the Measure and Release section you will need a measure board which can be purchased from Decoro for $20. These boards are also part of the NZ Fishing Comp which you can fish at the same time Register Here.

Loads of incredible prizes thanks to Decoro / Rockgas Tauranga and NZ Bayfisher Magazine. One major prize per angler with loads of spot prizes up for grabs.

BRIEFING is 6.30pm Friday 18th November at the TSFC 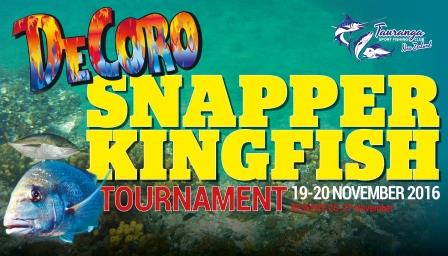