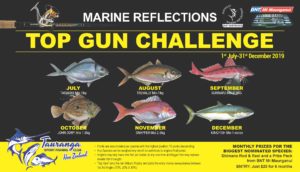 ENTRY: $20 TSFC Anglers Only – Payment can be made at any time during the competition, but no later than the day prior to weigh-in of your first fish.

RULES: Fish must be caught within NZ Chart 54 modified and in accordance with Club, NZSFC and IGFA rules and must be weighed at the TSFC. Random access permitted. Fish must be fresh.

POINTS: Accumulating ladder total. Highest position 10 points descending. Any species can be weighed any month to contribute anglers final points. Anglers may only have one fish per ladder at any one time. Bigger fish may replace smaller fish if caught

FINAL WEIGH IN: 6pm 31st December 2019
RESULTS: Leader Board will be displayed in the club foyer and every Friday in the Weekly Newsflash.