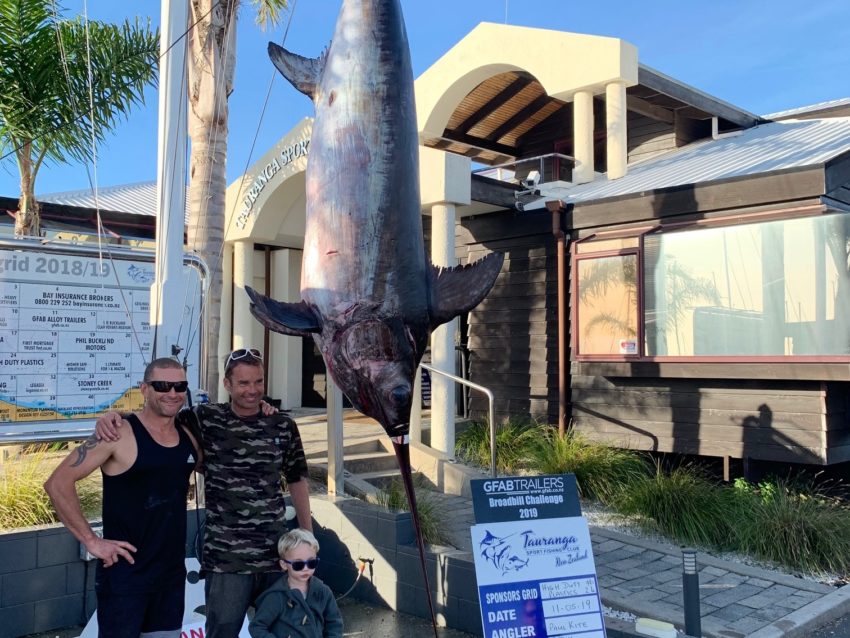 This year’s it was decided to run the Broadbill Challenge over a longer duration (18th April – 31st May) as we were keen to see anglers maximising their time on the water as the weather this time of year is usually more unpredictable so it was fingers crossed for a few more settled periods that what we had last year.

With the cash being won last year our premiums went through the roof! So after looking at numerous options for providing a cash prize this year the Fish Committee did a superb job finding a solution and was again thrilled able to offer the incentive of $10k to anglers should a fish be caught over 260kg.  Unfortunately returning with the cash prize meant that the tournament fee had to be increased to $75 which didn’t deter the 77 anglers that signed up. Among the anglers that signed up this year were proven talented anglers, skippers and teams that were sure to test the $10k offer.

We didn’t have to wait long for the weighmasters phone to be ringing  with a large sword being reported on Good Friday the 19th April! YIP that’s day one!  A preverbal dream team of angling talent had assembled on Bandit and looked to have hit the ball out of the park with a fish that had been reported as perhaps going close to the 260 mark.  Angler Michael Easton after an exhaustive battle and with the help of the team secured what could only be described as a beast of a fish, this later loading the scales to 274kg.  Unfortunately the fish was non-qualifying after a gaff rope rule was breached.  This was such an amazing fish, for most of us the biggest we had seen so clearly it was disappointing for everyone. 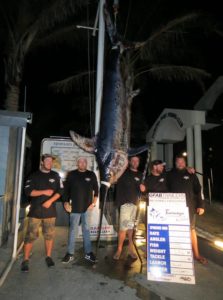 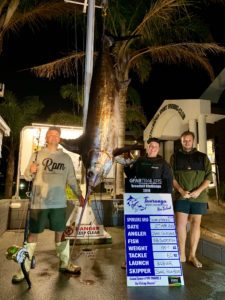 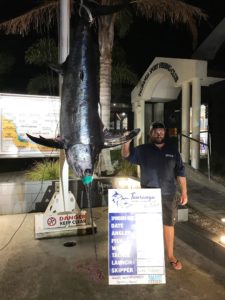 A week later Elevar landed another “CLanker!” with Isaac Churcher on the rod a little further from home in the Stoney Creek sponsors grid (White Island) This fish was fat, really fat and weighed in at 199.20kg and immediately became the fish to beat.  The 4th May brought about the third fishable weekend, giving many of the boats the opportunity at least to spend some time on the grounds. The team on Crows Nest has been practising the “day time thing” and hit pay-dirt with a nice tagged sword estimated at 180kg for angler Craig Parnwell. The same day Jamie Lee off Fascination 2 hooked, battled and landed and later weighed a 143.2kg sword again very short but very fat.  Cherie Elmsly and brother Hayden got in on the action the following day on their boat Satisfaction with a smaller but solid fish, this one being tagged and swimming away strongly to fight another day.

The Reel Bay fish was the next to be hooked in the High Duty Plastics grid #24 on the 11th May. It was played alongside Campbell Carters sword (fishing aboard Bandit) which came to the boat minus a bill and estimated at 80kg, this was TnR’d and sent back home while the battle on Reel Bay raged on. Paul Kite was locked in a solid battle with a very stuborn very large fish, the guys had seen it on the surface and called it as a good one but it wasn’t until it was boat side over 4 hours later and the lads unable to get the behemoth through the transom gate did they realise just how big this fish was.  Getting this fish to the weigh station given it size became a matter of urgency with the $10k riding and what a good call it was!  When lifted on the gallows the fish only just squeaked over the 260kg mark by 300grams, that’s about one Heineken! So all of a sudden the Reel Bay fish was the one to beat and just three weeks to go…..

A mid-week hit out on the 14th May and taking advantage of the clear calm weather saw Stuart Roberts on board Miss Trev land a really nice sword estimated at 170kg. This one he decided to put a pin in and no doubt secretly hoped this might qualify for the last tagged fish.  The following weekend Michael Easton struck again, this time fishing on Reel Heaven with Luke Dolman.  This broadbill was not quite the monster they were hoping for and was tagged and the lads carried on chasing the trophy.

It was to be Reel Heaven again in the spot light on the 25th May with all of the lads entered in the H&F Snapper Classic, but strangely ended up sword fishing?!  Mid-morning Luke coming across Channel 3 reporting John Milnes as being hooked up to something good. As the hours rolled on expectations soared as to the size of the fish and I’m sure the good fellas on Reel Bay could see the $10k potentially disappearing to a better fish. John played that fish for 10 hours, that’s one hell of an effort! Hooking what was clearly the Mike Tyson of swordfish, punching well above its weighed (which ended up being 166.9kg) Nice fish and unbelievable effort guys!

To wind things up it was to be Michael Easton that had the first word and the last, catching the biggest and the smallest and finally tagging the most when he put a pin in a nice estimated 70kg fish again in HDP #24 on the 30th May.

What an event it certainly had a bit of everything! Congratulation to Reel Bay and Paul Kite not only winning the $10,000 but also cementing a new Club 60kg Mens Record. Well done also to all of our anglers.  Thanks to everyone that came to the prize giving it was fantastic to see so many of you there celebrating the fishing the fish and comp, and finally thanks gain to our awesome sponsors!

SEE ALL THE PHOTOS HERE !

*Just a quick side note here to say thanks guys for sharing the fish about, I know all of the staff were raving about how delicious the fish was (a real treat) Thanks!